A sneak peek into Intrum’s annual European Payment Report – a survey of 11 000 companies across 29 countries – shows that an increasing share of European businesses identifies timely payments as trust building, and as a potential catalyst for investments in sustainability efforts. But the payment morale still lags behind. The full report will be published on 21 June.

During current economic uncertainties, getting paid on time is crucial to ensure a robust economic position and strong liquidity. And Intrum’s annual survey shows that the awareness regarding the impact of payment culture, including the influence of social factors, is on the rise.

Increased awareness about the social impact of late payments
Two thirds of the surveyed companies identify timely payments as critical to maintain trust with suppliers, and an equal share says that it is especially important that large businesses avoid delaying payments to smaller suppliers. Overall, both topics are ranked higher in 2022 compared to previous years. Also, 6 out of 10 believe that payment times are so central to sustainable business behaviour that it should be part of a company’s required sustainability reporting.

At the same time, 6 out of 10 companies say that they rarely think about the negative impact that late payments might have on smaller businesses, and one third admit they pay their suppliers later than they would ever accept from their own customers.

“A majority of European businesses agree that paying on time is an important part of a sound relationship with your suppliers. However, there still appears to be a discrepancy between the importance put on timely payments and actual payment behaviours. Simply put, some companies tend to have higher expectations on customers and competitors, as compared to themselves”, says Anna Fall, Chief Brand & Communications Officer at Intrum.

Prompt payments could boost sustainability efforts and create new jobs
Getting paid on time is crucial to ensure a robust economic position and strong liquidity. Intrum’s research also indicates that it could create positive ripple effects. Two thirds of the surveyed businesses report that faster payments would enable them to invest in sustainability efforts and every other respondent says it would enable the company to hire more employees.

The report will be available to download on the 21 June at www.intrum.com/epr2022 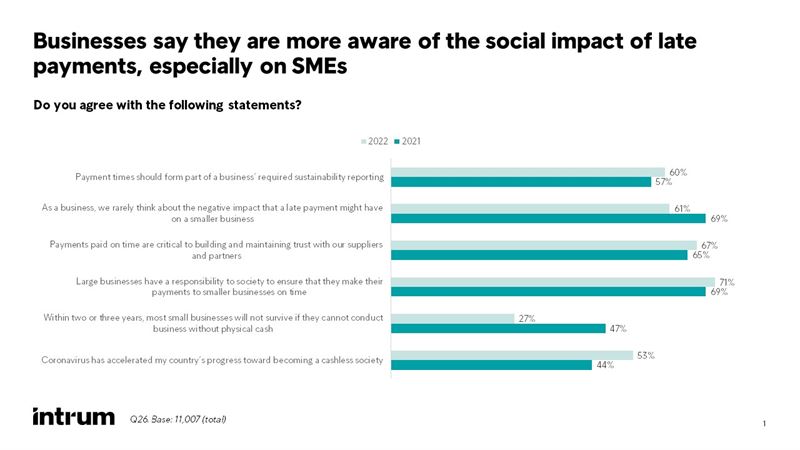 About the survey:
*The European Payment Report describes the impact of late payments on businesses’ outlook, growth, and development. Intrum gathered data from 11,007 small, medium and large companies across 29 European countries covering 15 industry sectors. The report was compiled between 17 January 2022 and 15 April 2022.